The Latin All Stars 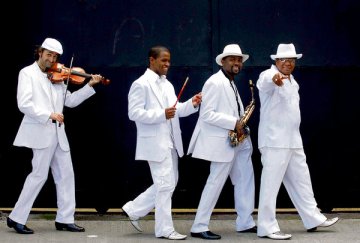 The Latin All Stars are Irelands most popular latin band direct from Havana in Cuba . This Budget Wedding band´s tight sound draws from old rhythms to the latest latin mix influence filtered through the multicultural energy of Europe. Its repertoire ranges from traditional Cuba songs to original compositions. As the name suggests its unique and full tempting Afro Caribbean world music innovating flavour.

Testimonial
“I wanted to drop you a note to let you know the Cuban allstars were a huge success on Friday.  The band were fantastic, and both the committee and the guests were delighted with the performance.Thanks for all your help in the lead up – and the selection of such a great band – I look forward to booking them again”
Emer O’Reilly ConneXions PR

Nephew of the latest ARAGON ORCHESTRA maestro Rafael Lay, one of the greatest Cuban Musician ever, Tony Oscar has been described as Europe’s answer to James Brown or even to Benny More, the 1950’s real Salsa King and his personal inspiration as a musician and as an artist.

Always a leader in his field, multitalented Tony Oscar has created and continues evolving a succulent mix of rhythms such as Rap, Funk, Hip-Hop, R&B, Merengue, Cha-cha-cha, and Afro-Cuban Jazz with Salsa. His newest K&B style (Reggaetton with Cuban flavour) has evolved into an exciting act that puts the audience to dance and sing and foremost has created a unique following. Most recently the band were seen supplying the entertainment on the final of the hit TV3 series ‘The Apprentice’.

With heavyweights such as Master percussionist and ex teacher of the prestigious Cuban Art and Music Academy  Don Frailan, and top world class percussionist and DJ- Mr. Bongo, every show is unique and every presentation unforgetable; a mixture of rhythmic overtones with warm harmonies, romantic lyrics, and an urban feel that makes you tap your feet and sway to the rich sounds. Memorable hooks stay with you long after you’re done listening, the compositions move both body and spirit.

Tony Oscar & CUBAN ALL STARS is a celebration to music and dance, so join his musical Latin & Afro-Cuban Extravaganza!!